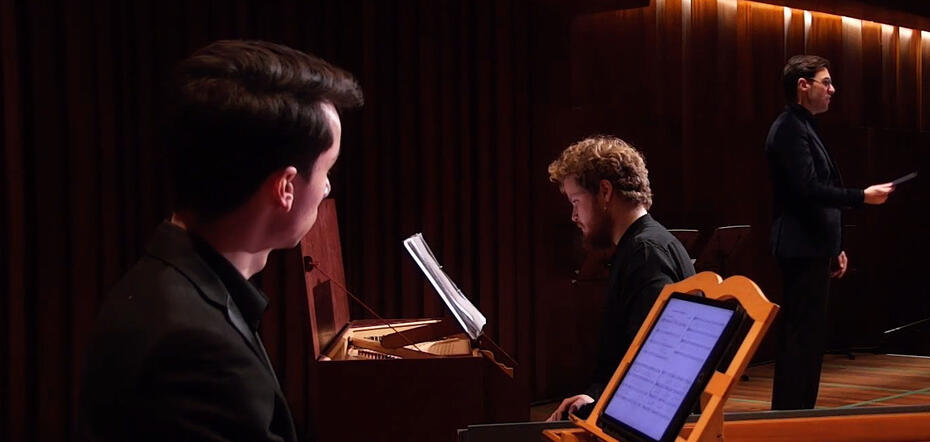 Matthew Brown is a harpsichordist, early organist, and music editor based in London. A current Masters student at Guildhall School of Music and Drama, Matthew is experienced as a solo harpsichordist and organist, continuo player, editor and researcher.

Matthew Brown is a harpsichordist, organist, editor of early music and researcher living and working in London. His previous training and career spans a wide variety of musical pursuits, including jazz saxophone, musical theatre direction and Anglican church music, giving him a breadth of experience and capabilities which greatly enhance his present musical activities.

Moving from his hometown of Guildford to Victoria, Canada in late 2015, Matthew enjoyed several successful musical experiences there. He held positions as Chorister and Junior Organ Scholar at St John the Divine Church, Choral Scholar at Christ Church Cathedral, and enjoyed fruitful collaborations with the Victoria Baroque Players, Pacific Baroque Orchestra, Pacific Opera Victoria, Pacific Baroque Festival, St. John’s Chamber Singers and St. Christopher’s Singers. Since leaving in 2017, Matthew has retained several contacts in the city, enabling him to return occasionally for musical engagements such as an organ recital at St. Andrew’s Presbyterian Church in July 2019.

Leaving Victoria for Bristol in 2017 to begin his undergraduate degree, Matthew quickly formed new contacts and engagements. He gained the position of Organ Scholar at the prestigious St. Mary Redcliffe Church, which he held for the duration of his time in Bristol. Aside from academic commitments, Matthew took part in a variety of performing opportunities in the city, including holding the position of director of the University Baroque Ensemble, a historically informed instrumental group which he guided through several performances in 2018-19. His engagements also included solo organ and harpsichord recitals at St. Mary Redcliffe and Christ Church with St Ewen, collaborations with Baroque and Beyond, a performance of Bach motets with the Bristol University Madrigal Ensemble and a concert including Saint-Saëns Symphony no. 3 (Organ) as organist with Bristol University Symphonia.

Since taking up his place in September 2020 on the Extended Artist Masters programme at Guildhall School of Music and Drama, Matthew has established himself as a performer and collaborator in demand. He has played as a harpsichordist and organist for the Guildhall Consort and the Guildhall Cantata Ensemble in venues such as Milton Court Concert Hall and Hatchlands Park in 2020/21, and St. Giles Cripplegate, New Malden Methodist Church and the London International Festival of Early Music in 2021/22, with ongoing commitments in 2022 and 2023. He has taken part in a variety of performing commitments as a member of the Historical Performance Department, at festivals and venues such as Milton Court Concert Hall, Silk Street Music Hall, the Deal Festival and New Malden Festival. He also regularly plays for masterclasses and coachings at Guildhall, including regular masterclasses with Emma Kirkby. Outside of his Guildhall commitments, Matthew is active as a freelance performer, with selected recent engagements including Handel and Vivaldi Concerti with the Academy of St Mary-le-Bow, Christmas baroque music with CollectIvel, and a performance at the Music-at-Hill Bach Festival with Floria Baroque.

In January 2021, Matthew’s first publication as editor was published, a new edition of Johann Mattheson’s Die Wohlklingende Fingersprache. This was undertaken as a collaboration with co-editor Colin Booth, and published by the small English company Soundboard. A 70 page volume of keyboard music, comprising 12 fugues and assorted dance music with a scholarly preface in English and German, this effort replaces an outdated earlier edition by Breitkopf and Härtel, and represents a formidable tool for players, researchers and academics. The edition is available for purchase here.

Since early 2021, Matthew has been one of the founding members of the chamber group La Foscarina, with his colleagues Thomas Pickering and Olivia Petryszak (recorders). Collaborating extensively since the group’s inception in classes, specialist coaching and performance opportunities, La Foscarina most recently attended the Gstaad Menuhin Festival Baroque Academy in August 2021, taking advantage of teaching and coaching opportunities with musicians such as Maurice Steger, Rachel Podger, and Diego Ares. The group is looking forward to a fruitful upcoming year, including concert development, further coaching and training, performance opportunities and applications to young ensemble development schemes.

In September 2021, Matthew also launched a new ensemble, The Queenes Chapell, as an adjunct to a research project he is undertaking at Guildhall in 2021/22. The five voice vocal ensemble, accompanied and directed by Matthew at the organ, aims to replicate the performing environment in the English Catholic chapel of Queen Henrietta Maria in the 17th century, experimenting with little-explored issues in historical performance practice to deliver fresh and engaging performances. The ensemble will put the explorations of Matthew’s research into action, exploring a new, virtuosic and soloistic approach to the performance of 16th and 17th century liturgical repertoire.

I own a fine harpsichord built in 2004 by the English harpsichord maker Colin Booth, which is available for concert hire. It is a beautiful single-strung Italian harpsichord after Italian models of the 16th and early 17th century, built in cedar of Lebanon and spruce wood and strung in brass. The compass is GG/BB - d’, and transposes between A415-A440. The instrument produces a warm and resonant, but nevertheless brilliant and striking tone.

The instrument is best suited for chamber music and solo music of appropriate repertoire, given its small size, but would certainly also be useful in larger ensembles as a second harpsichord or part of a large continuo section.

Hiring the instrument generally includes delivery, pre-rehearsal and pre-concert tuning, but this can be adjusted as necessary for individual requirements.

Please get in contact to discuss your individual hiring needs.

Please do get in contact with inquiries about performing, collaboration, instrument hire or tuning.

I can be contacted by email: [email protected], and at the links below.